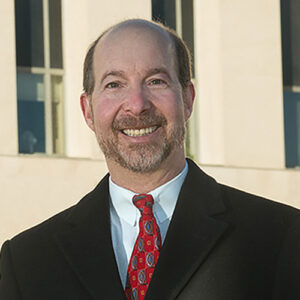 As of January 2020, Jon Gould is Foundation Professor of Criminal Justice and Law and Director of the School of Criminology and Criminal Justice at Arizona State University, a top-five program in the United States. Previously, he was Professor of Public Affairs and Law and inaugural director of the Washington Institute for Public Affairs Research at American University. An author of four books and more than fifty articles on issues of justice policy and reform, he has also served as a Senior Policy Advisor in the U.S. Department of Justice, Director of the Law and Social Sciences Program at the National Science Foundation, and U.S. Supreme Court Fellow. In 2015, U.S. Chief Justice John Roberts appointed him as reporter for a committee of the federal courts evaluating the operation of the Criminal Justice Act.

Jon Gould will join the faculty of the School of Criminology and Criminal Justice in January of 2020 as a Foundation Professor and Director of the School. Prior to coming to ASU, he was inaugural director of the Washington Institute for Public Affiars Research and chair of the Department of Justice, Law and Criminology at American University. He served as the principal investigator for the Preventing Wrongful Convictions Project, a multi-year research initiative funded by the National Institute of Justice. Most recently, Gould was appointed and served as a Senior Policy Advisor in the U.S. Department of Justice during the Obama Administration and was director of the Law and Social Sciences Program at the National Science Foundation.

Professor Gould is an internationally known expert on justice policy, social change, and government reform. An author of four books and over 50 articles, he has written on such diverse subjects as erroneous convictions, indigent defense, prosecutorial innovation, police behavior, hate speech, sexual harassment, and international human rights, among others. His first book, Speak No Evill: The Triumph of Hate Speech Regulation, was a co-winner of the 2006 Herbert Jacob award for the best book in law and society. His second book, The Innocence Commission: Preventing Wrongful Convictions and Restoring the Criminal Justice System, was named an Outstanding Academic Title by the American Library Association. Professor Gould has won awards for his teaching and service as well and is a regular contributor to The Hill newspaper.

Professor Gould’s research has been supported by more than $3.2 million in external funding and has been cited in multiple court pleadings and judicial decisions. He has received grants from the National Institute of Justice and the National Science Foundation and has been supported by several private foundations, state and local governments, and government of Canada. He is regularly called upon to serve as a consultant to governments and non-governmental organizations alike, both domestically and abroad.

Prior to joining American University, Professor Gould was associate professor and director of the Center for Justice, Law and Society at George Mason. He has practiced law with the Washington, D.C. office of Mayer, Brown and Platt; helped to direct programming for the International Human Rights Law Institute; and worked on the national staffs of two presidential campaigns.

Professor Gould is a fellow of the American Bar Foundation and is a former U.S. Supreme Court Fellow. He has served on multiple non-profit boards and is a trustee of the Law and Society Association. In 2015, U.S. Chief Justice John Roberts appointed him as reporter for a committee of the federal courts evaluating the operation of the Criminal Justice Act. Professor Gould received the Administration of Justice Award from the U.S. Supreme Court Fellows Association in 2017.
Education